Ductal carcinoma in situ (DCIS), one of the most common pre-cancers across all tissues, is a non-invasive or pre-invasive breast cancer where the cells lining the ducts have changed to cancer cells but have not broken through the walls of the lobules or ducts into the surrounding breast tissue. Accounting for 1 in 5 new breast cancer cases, these early pre-cancers are not life-threatening but associate with a higher risk of developing invasive breast cancer at a later stage.

DCIS is a molecularly heterogeneous group of lesions and the risk of developing into invasive cancers therefore varies considerably. Up until now, it has not been possible to accurately predict the likelihood of recurrence or progression. Recently published ahead of print as an open access Article in Cancer Cell*, results of a study directed by investigators at the Stanford University School of Medicine (USA), and co-authored by José A. Seoane, Principal Investigator of VHIO’s Cancer Computational Biology Group, report a new gene classifier to help predict clinical outcomes in DCIS.

This research was designed to advance insights into the spectrum of molecular events in DCIS, identify both tumor and stromal predictors of subsequent events, and expose the factors that underlie progression to invasive disease. To do so, the investigators analyzed 774 samples from 542 patients who had undergone surgery to remove areas of DCIS, who were a median of 7.4 years post-treatment. They identified 812 genes associated with cancer recurrence within five years from treatment and developed a new gene classifier to predict both DCIS recurrence or progression, with the latter appearing to be dependent on a process requiring crosstalk between invasive DCIS cells and the unique features of the tumor environment. 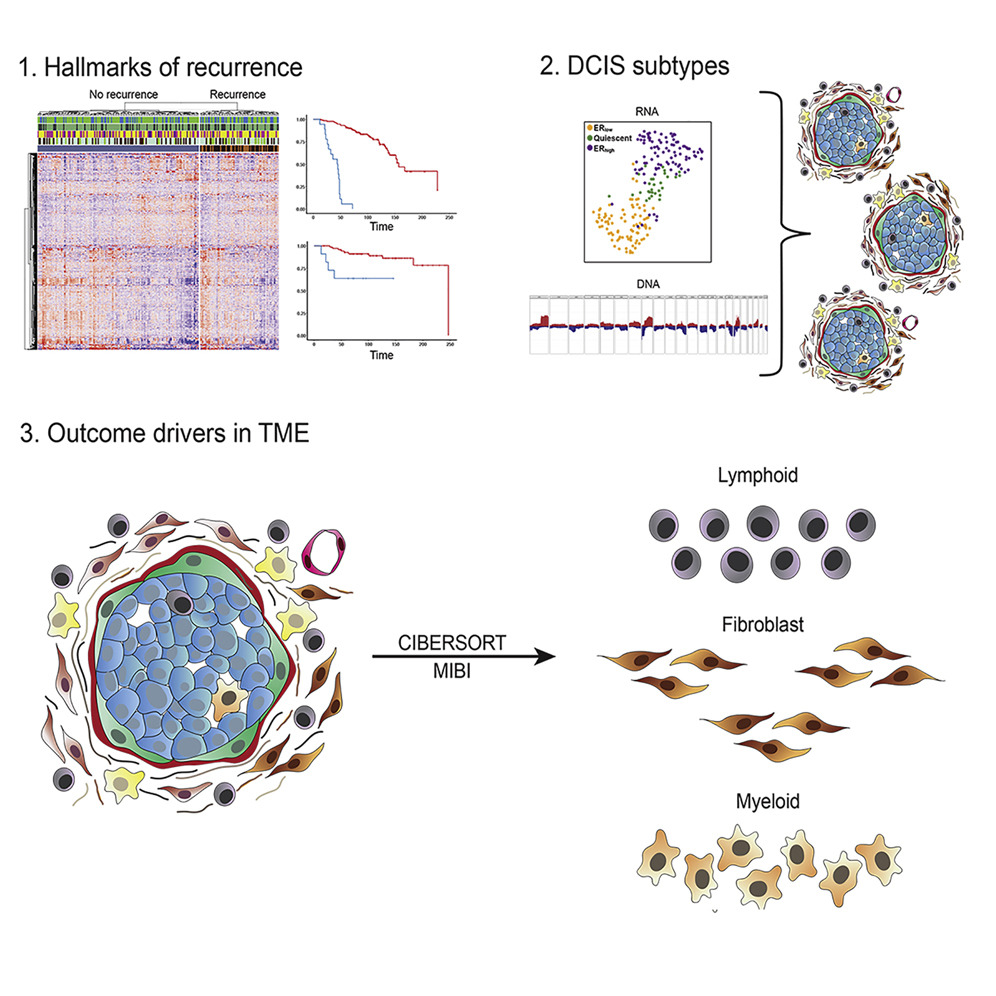 As part of the Human Tumor Atlas Network (HTAN) funded by the National Institutes of Health (NIH, USA), the investigators performed multimodal molecular analyses of patient samples from the Translational Breast Cancer Research Consortium (TBCRC) 038 study and the Resource of Archival Breast Tissue (RAHBT) independent cohorts, and have discovered that pathways associated with disease recurrence include proliferation, immune response, and metabolism.

“Previous studies have evaluated the prognostic value of biomarkers of clinical outcome in DCIS but with conflicting reports for virtually all markers tested, including estrogen receptor expression, HER2 status, immune markers such as tumor-infiltrating lymphocytes, and stromal characteristics,” says José A. Seoane, a co-author of this present study.

“We have now developed and validated a new gene classifier that independently predicted risk of both overall DCIS recurrence and invasive progression. Our data show that disease progression is promoted by interactions between invasive DCIS cells and specific features of the tumor environment. The majority of DCIS cancers analyzed in this study were identified to be at low risk of cancer progression or recurrence, highlighting the need for an accurate predictive test to help guide treatment decision making,” adds Seoane.

In most cases, current treatment of DCIS involves breast conserving surgery or mastectomy with the aim of preventing invasive cancer. Providing more precise data to better identify those early pre-cancers that are at high risk of developing into invasive ones will help to inform the selection of therapy for individual patients.

“We have now made important progress in better understanding DCIS biology. Results of this study could ultimately help guide treatment decision making based on individual risk of disease progression and avoid overtreatment of a subgroup of patients without compromising clinical outcomes,” concludes José A. Seoane.

José A. Seoane’s research for this project was supported by funding received from the “la Caixa” Foundation.